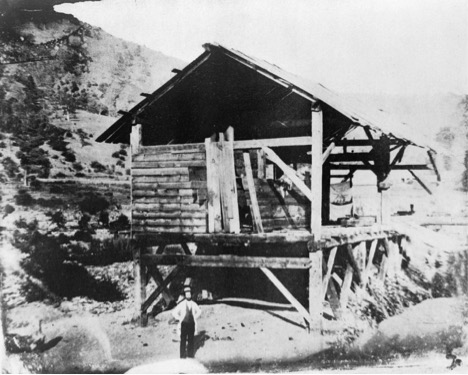 While the call was heard around the world, John Sutter didn’t really want anyone hearing it. The Swiss expatriate, who escaped to the Mexican province to run away from mounting debts at home to establish what is now Sacramento, CA, had originally wanted to keep the finding hush hush. Sam Brannon, a Mormon newspaper and businessman, on the other hand, had other ideas.

Having opened up the only store between Yerba Buena (San Francisco) and the Sierras in 1847, at Sutter’s Fort (founded by John Sutter as well), he became curious after Sutter’s Employees started paying for goods in gold. So, in the guise of a representative of LDS Church to gather tithes from the other brethren working in the area, he went up to the mill to reconnoiter the situation and found what he was looking for. Soon he bought every pan, pick axe, and shovel between the young city and the mountains, then took a trip to San Francisco with a vial of gold in his hand and proceeded to run through the streets crying at the top of his lungs, “Gold! Gold on the American River!” He then proceeded to sell his 20¢ pans for $15 a pop, soon making $36,000 by the end of the week as the city emptied out towards the hills, proving that the real gold rush was in supplying the prospectors.

After the American Military Governor of Occupied Alta California, Col. Richard Mason, visited the site as well and reporting back to President James K. Polk with a vial of his own (Yes, I am naming every street in downtown San Francisco), the President then announced the finding to a joint session of congress initiating the largest migration of people in American history from every corner of the earth.

Prior to the Strike there were close to 157,000 people residing in California, 200 in San Francisco, primarily aboriginals and Mexican Californios; by the 1850’s the territory swelled with more than an additional 300,000 souls (including the captains, sailors, and trackers that brought them there) with the city growing to a population of 36,000 people. These men extracted nearly 750,000 pounds of gold and made men richer than their desires and poor than dirt they dug at. These men would also later write the future state’s constitution, apply for statehood and become their leaders. The United State would then compromise in 1850 allowing the mineral rich country in to Union as a Free state that would become the first domino that would start America’s bloodiest war…but that is story for another day.

The Age of Gold: The California Gold Rush and the New American Dream, by H. W. Brands – Goodreads.com

The Shirley Letters from California Mines In 1851-52. – Project Gutenburg

“The California Gold Rush and the Contoversy over the State Constitution” by Dr. Gayle Olson-Rayme History 383, Humboldt State University