Odd Salon + Context Travel: The Rise and Fall of Angkor 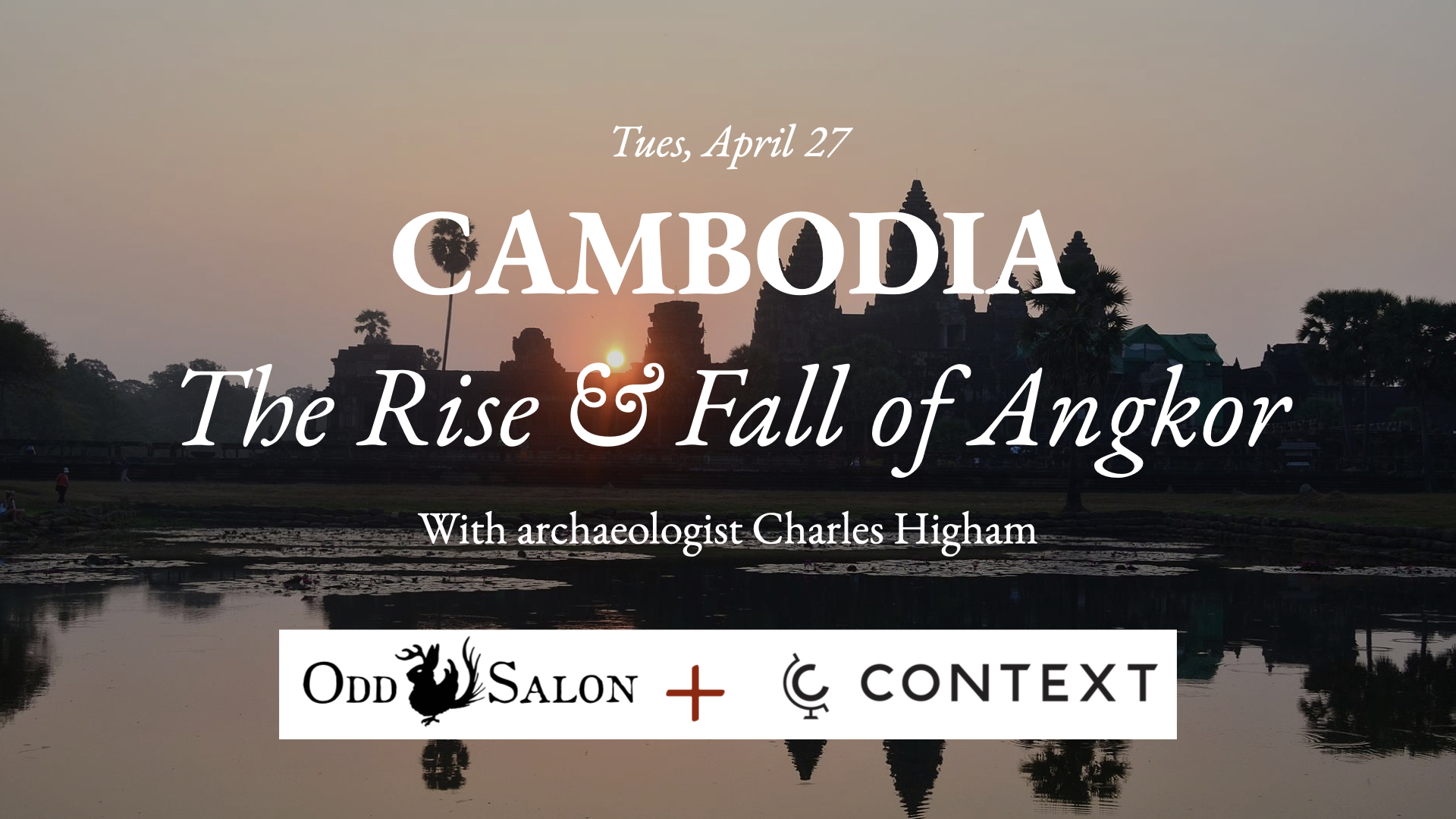 Explore the quintessential “lost city” of Angkor Wat with us during this very special interactive seminar led by Charles Higham, archaeologist and Emeritus Professor of Anthropology at the University of Otago, New Zealand.

How did the mighty civilization of Angkor in Cambodia come to be, and why did it collapse? This seminar will explore the impact of climate change on the rise and fall of the Khmer Empire.

There are two fundamentals to life in Southeast Asia: the arrival of monsoon rains and the importance of securing a predictable rice harvest. New research has shown that a period of weakened monsoon led to an agricultural crisis in the late prehistoric period (about 200AD). Motivated by decreased rice yields, this ingenious ancient society developed systems of reservoirs and irrigation to counter the lower rainfall. However, the unintended consequence of these technological advancements was a steep rise in social inequality and the rise to power of the God-Kings of the Kingdom of Angkor. During their peak, they built the epic complex known as Angkor Wat, unrivaled in its scale and grandeur. But, after six centuries of prosperity, a second climatic change brought catastrophe and the system collapsed.

Charles Higham is Emeritus Professor of Anthropology at the University of Otago, New Zealand. He is an archaeologist with a particular interest in the origins of Southeast Asian civilizations. His excavations in Thailand and Cambodia have greatly increased our understanding of how the great Kingdom of Angkor began, how God-Kings were revered, and with a climatic deterioration, how it came to an end.

Cambodia: The Rise and Fall of Angkor with Charles Higham

This is part one of our four part collaboration with Context Travel, as a special Members & Fellows series. These private events are included for free for all current Odd Salon Members, Fellows. To join us: New members may join by purchasing either the four part series pass for $125, or purchase tickets here to join the membership and reserve a spot for this seminar only for our standard annual membership cost of $100.

ABOUT CONTEXT TRAVEL: Context Learning is a cultural education provider, connecting global scholars with lifelong learners. Founded in Rome in 2003, Context started as a tour operator for travelers seeking off-the-beaten-path experiences in the world’s cultural capitals, growing quickly to 20,000 tours a year across 70+ destinations. After COVID-19 halted travel operations, Context continued to expand, launching live, scholar-led seminars and courses presented online. What emerged was a thriving community of experts and learners keen to continue exploring, growing, and philosophizing, regardless of their location. To date we’ve covered thousands of topics ranging from Tuscany to Timbuktu, Caravaggio to Frida Kahlo, Ancient Rome to Brexit. Context strives to be the cultural center for lifelong learning, at-home, on the ground, and everywhere in between.

If you are not already familiar with the many wonders of Context Travel, we’d heartily encourage you to go forth and explore their virtual and real-world exploration offerings