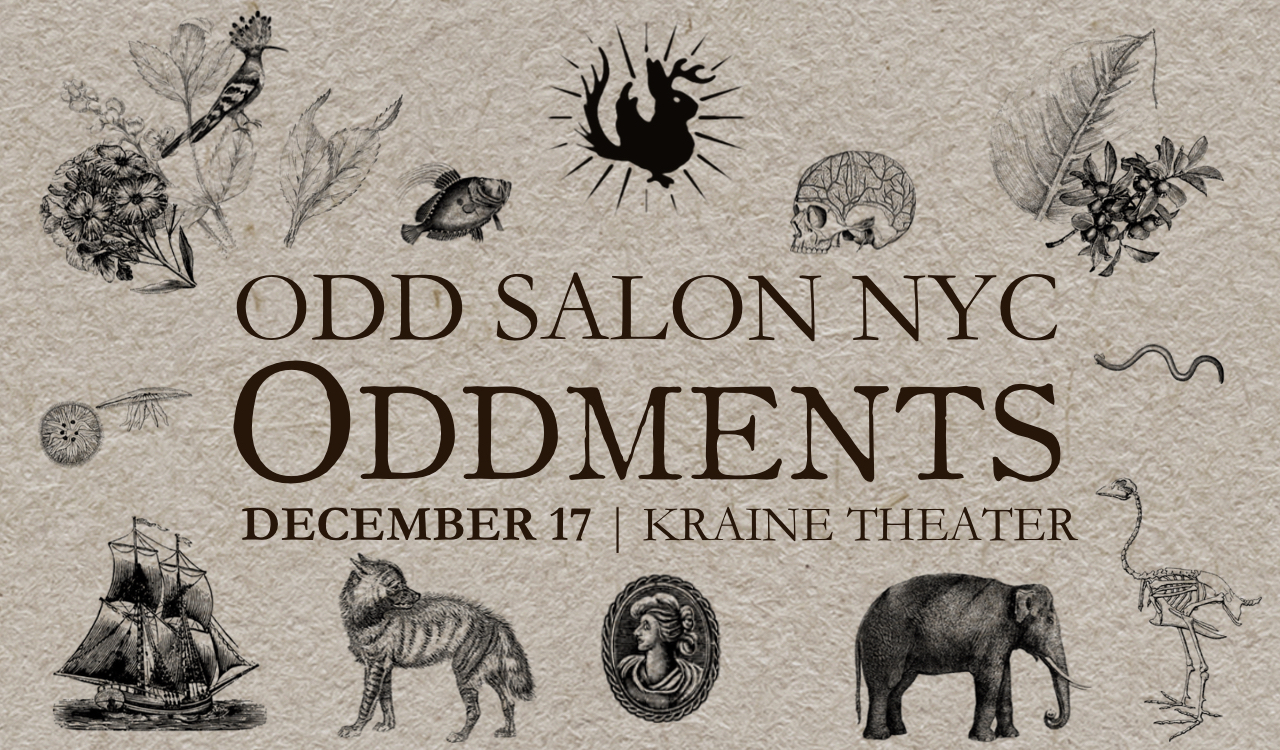 As is our December tradition, Odd Salon NYC brings you a perfectly, peculiar, potpourri, of weird and obscure tales in the fields of art, history, adventure, and science, that may not have fit in one of our themes the past year but we consider wonderful and worthy of telling nonetheless!

This night we celebrate a grab bag of oddities, share some toasts, and wrap up the year!

Rain Wiegartner ~ Fellow
The Monkey Assassin: Who Killed King Alexander?
After WWI, Greece was wracked with the collapsing Ottoman Empire, the rise of The Soviet Union, and pressure from the Western Allies to carve out territory. In the midst of all this turmoil, a ruler with a politically fraught marriage was killed by an angry monkey.

The Lady Aye ~ 3rd Talk!
The Bandit Who Wouldn’t Give Up: The Life and Death of Elmer McCurdy
The word “gunslinger” conjures images of cold-blooded men in black hats or charming gentleman bandits. Outlaw Elmer McCurdy was neither of those things: alcoholic, bumbling, and behind the times, his brief career as a train robber in life inadvertently led a long showbiz career in death.

Andrés Camperi ~ 3rd Talk!
Jakob Fugger: The Man So Rich He Broke the Catholic Church
Jakob Fugger loaned a large sum to build the Sistine Chapel. In order to pay him back, the Pope allowed Fugger to build places across Europe where parishioners could “buy” indulgences. This led to Martin Luther’s massive call-out of the Catholic church and the start of the Protestant Reformation.

Jennifer Batt ~ New Speaker!
Dr. Couney: And His Baby Incubator Sideshow
Dr. Couney ran “infant hatcheries” on fairgrounds where visitors viewed preemie babies in incubators. His sideshow attractions gave state of the art medical care when the medical establishment felt that pre-mature infants were not worth saving. Dr. Courney saved an estimated 7,000 lives when he closed his last attraction in 1943.

Sarah Eli Judd ~ New Speaker!
Titivillus: The Typo Demon
The scourge of biblical scribes throughout ancient history was not Beelzebub, Satan, nor Lucifer. The demon they had to battle on a daily basis was Titivillus! This most sinister agent of evil quietly lied in wait as eventually scribes hands tired, and eyes strained, and then he would strike, inserting misspellings and error into God’s texts!