The words of the poet Horace remind us that although life is short and the future uncertain, to savor the moments we do have, and seize the day.

For as long as we have been counting time with clocks and calendars, writers and artists and melancholy minds have protested the fleetingness of it, the unfairness of our brief allotment, and the question of whether one can ever bank on the future.

In 1817, the poet and Latin enthusiast Lord Byron wrote a letter, quoting an obscure Latin phrase he had come across “I never anticipate… carpe diem: the past at least is one’s own, which is one reason for making sure of the present.”

Byron plucked this phrase from a passage from the Greek lyric poet Horace, in his Odes, book one, written around 23 BC. It is in the form of advice being given to a female companion named Leuconoe. It is about the fleetingness of life, and the uncertainty of the future. It is both melancholy and beautiful.

Ask not—for we cannot know—what end the gods have set
for you, for me;
And do not turn to Babylonian astrologers, Leuconoë.

It is better to endure whatever the future holds, like the past
whether Jupiter has many winters yet to give
or whether this is our last,
which even now wears out the Tyrrhenian Sea on the shore

Be wise, mix the wine; and confine your hopes to the near future
Even while we speak, envious time has passed:
Seize the day, trusting tomorrow as little as possible 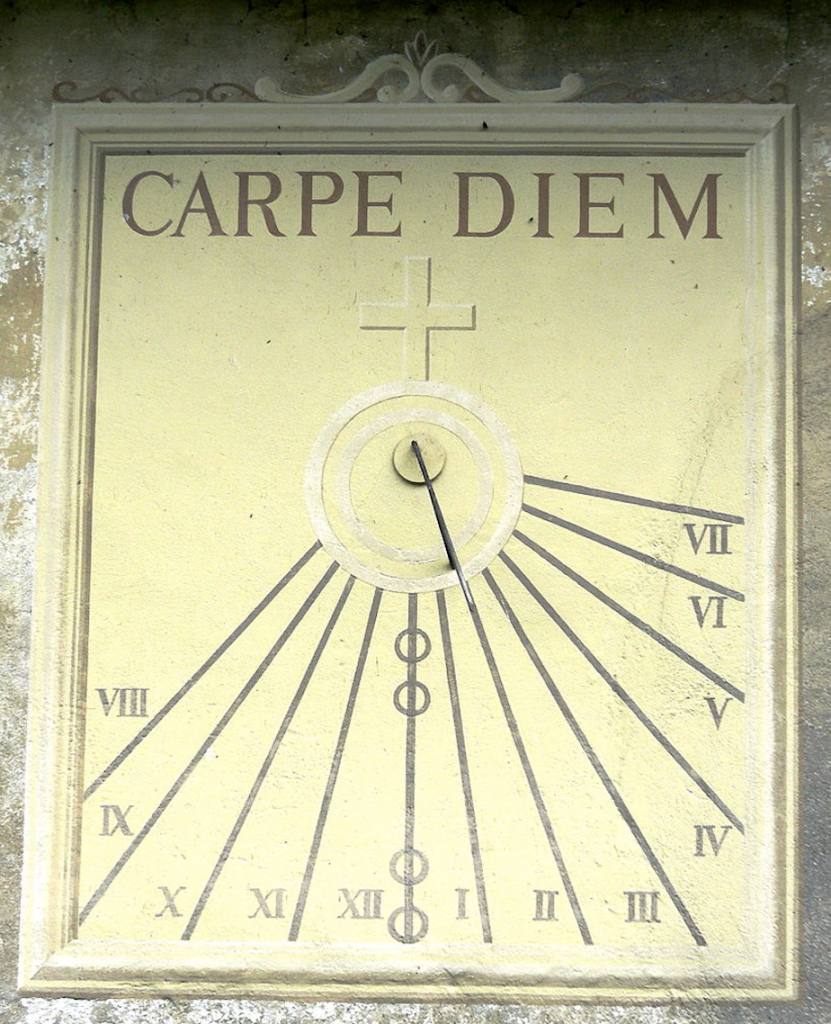 What Byron had found was not a new thought necessarily, but one phrased in a positive turn of phrase. Since at least the middle ages and the ravages of the Black Death, reminders of the shortness of life in Vanitas art and memento mori motifs were common, particularly in religious settings as a reminder that life is short, so best be getting to the repenting. Unlike those seemingly similar reminders, Horace’s words carpe diem, popularly and most commonly translated as “seize the day” can also be trabslated as “pick” or “pluck” the day, with the emphasis on taking advantage of the now, of making what we can and enjoying the moments we are given. It is not then surprising that “Carpe Diem” has become a favorite of clockmakers as a gentle reminder to savor what time we do have.

The Odes of Horace – Poetry in Translation