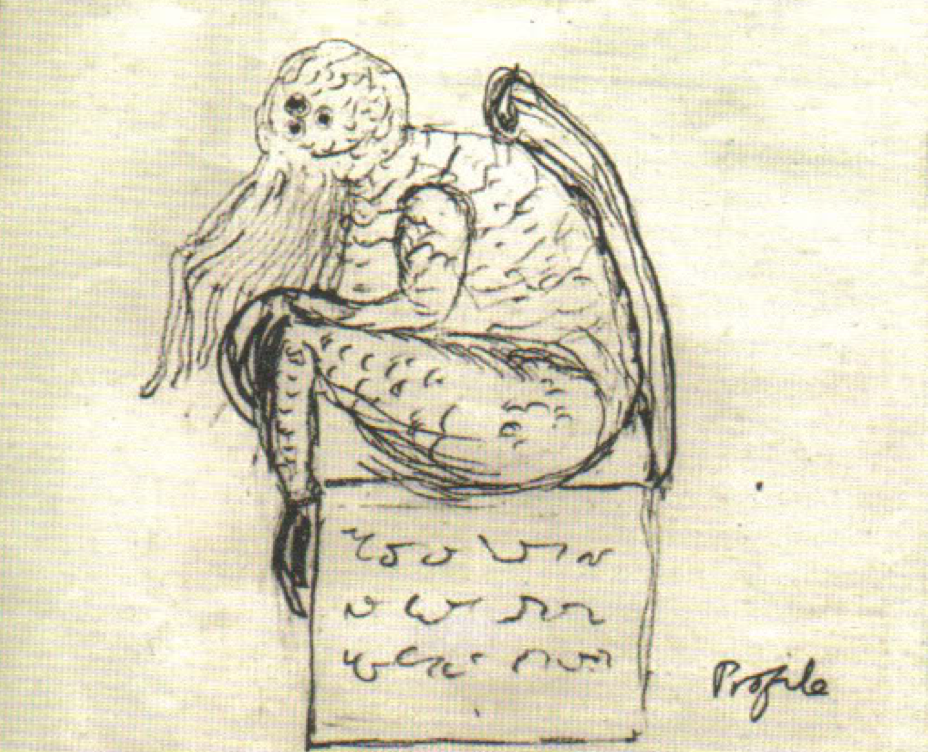 Sketched in profile by the author himself, this Cthulhu doesn't exude planet-destroying rage. But maybe he's still in deathly repose patiently awaiting an opportunity to pounce.

It’s difficult to overstate the influence of Howard Phillips Lovecraft’s works on horror and fantasy literature. Massively successful writers like Stephen King and Neil Gaiman have given Lovecraft prominent citation among their inspirations. And the story that has become emblematic of his work is the tale of a rubbery, octopus headed, billion year old monster named Cthulhu. Indeed, Lovecraft’s legacy and the writings, art, films, and games he inspired are collectively known as the Cthulhu Mythos. So why did a guy named Farnsworth Wright nearly consign it to obscurity?

In 1916, H.P. Lovecraft published his first story. For the next seven years his works appeared in tiny, obscure journals for which he was typically compensated nothing. Come 1923 a man named Edwin Baird launched a pulp magazine specializing in horror and fantasy; he called it Weird Tales. Lovecraft’s gift for unsettling fiction was a natural fit for the new periodical and he was regularly featured there for the rest of his career, seldom appearing in any other journal. In the summer of 1926 Lovecraft composed The Call of Cthulhu, but wasn’t happy with it. He didn’t exactly hate it, but when an author describes his own work as “full of cheap and rather cumbrous touches” little is left to conjecture. Despite those reservations, Lovecraft submitted the piece to Weird Tales. By this time Edwin Baird had stepped down and his duties had been assumed by Farnsworth Wright, a man less likely to print everything Lovecraft sent his way. Wright said “no thank you” to the Call of Cthulhu and Lovecraft presumably shrugged it off. And that, as they say, would have been that.

Sometime in 1927 however, kindred author and friend of Lovecraft, Donald Wandrei butted in. Wandrei told the new Weird Tales editor that Lovecraft intended to shop “The Call of Cthulhu” to other periodicals. This was a total fabrication and probably perpetrated without his friend’s knowledge. Lovecraft was the anti-Barnum. The man had negligible interest or skill in self promotion and would have let the story languish in darkness forever. But Wandrei’s ruse had the desired effect. Wright relented and published the seminal work in the the February 1928 issue.

Did the Cthulhu character take the world by storm upon publication? Absolutely not. Weird Tales had circulation in the thousands, a far smaller reach than many of its contemporary pulp magazines. In truth, we would still have Cthulhu even without Weird Tales because we had Donald Wandrei. Following Lovecraft’s untimely demise Wandrei partnered with author August Derleth to found Arkham House, a publishing company with the sole mission of sharing their late friend’s writings with the world. Weird Tales may have been the first to print, but without Arkham House, Cthulhu would still lie dead but dreaming.

Added to the calendar by Odd Salon Fellow, Stuart Gripman