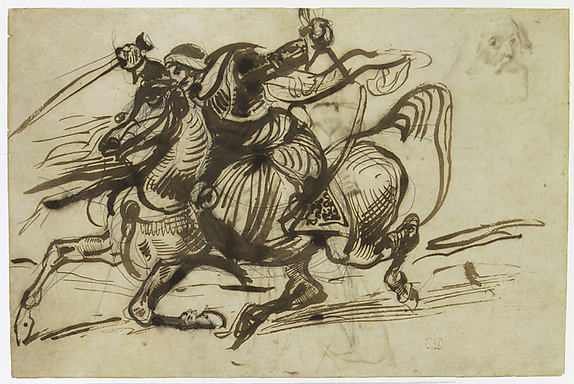 For inspiration for UNDEAD, we turned to an unseasonably cold and stormy night in the summer of 1816 and the words of the original English vampire… Lord Byron

In April, 1815 on the remote Indonesian island of Sumbawa, Mount Tambora exploded in a spectular volcanic eruption, causing a tsunami, an estimated 10,000 – 50,000 deaths, and triggering a brief but dramatic period of climate change around the world. As far away as London, eerie orange sunsets and darkened skies turned the following year into “the year without a summer” also popularly referred to as “Eighteen Hundred and Froze to Death”.

That summer, in unseasonably cold and stormy weather, five friends gathered at a villa on the shores of Lake Geneva. Trapped inside by the weather, they turned to telling ghost stories. Incredibly, this one evening resulted in the creation of two of the most enduring monster stories in modern fiction.

Gathered at that villa were Lord George Gordon “mad, bad, and dangerous to know” Byron, age 28, recently famous and back from the grand tour; the poet Percy Blythe Shelley, best known for epics like Ozymandias, age 23; John William Polidori, personal physician to Byron, age 20; Mary Godwin, daughter of the firebrand and feminist Mary Wollstonecraft, age 18 and madly in love with Shelley, and Claire Clairmont, Mary’s stepsister, pregnant with Byron’s child. She was 18. 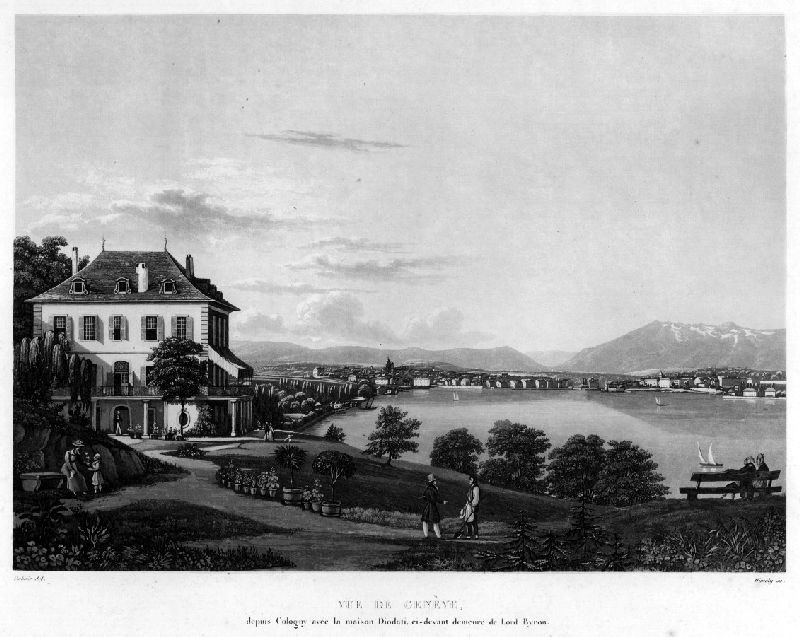 After sharing spooky stories, they challenged each other to write their own. The results were impressive. The most famous of course, is Mary soon-to-be-Shelley’s Frankenstein. The other, lesser known work is considered to be the first English vampire novel, titled creatively: The Vamypyre.

This groundbreaking work was not produced by either of the two acclaimed writers present, but instead by John Polidori, Byron’s deeply irritated young physician.

The Vampyre is a short tale, but it introduced most of the elements of the modern vampire in the guise of a dashing and charismatic yet strangely distant aristocrat, young maidens, helpless and drained of blood in the middle of the night, and impotent crusaders, trying in vain to defeat the monster in their midst.

For all of that, it’s not very good, and for a first-of-its-kind work, it steals a lot of elements from others.

First off, the main character, Lord Ruthven, is clearly an unflattering caricature of Byron, a womanizing and cold-hearted killer and stealer of joy. But even that was not original – Polidori borrowed the vampire motif from an unpublished short work by Byron, and the character from ANOTHER unflattering portrayal of Byron, penned by a former lover. It would seem that Polidori did not think very highly of the boss man.

So it is kind of entertaining that when the little book was first published in 1819 it was originally credited to Byron, and Polidori had to fight for credit to his not very good but historically important vampire story. At least, if nothing else, he had beaten Byron to the punch in publishing the first modern vampire tale. 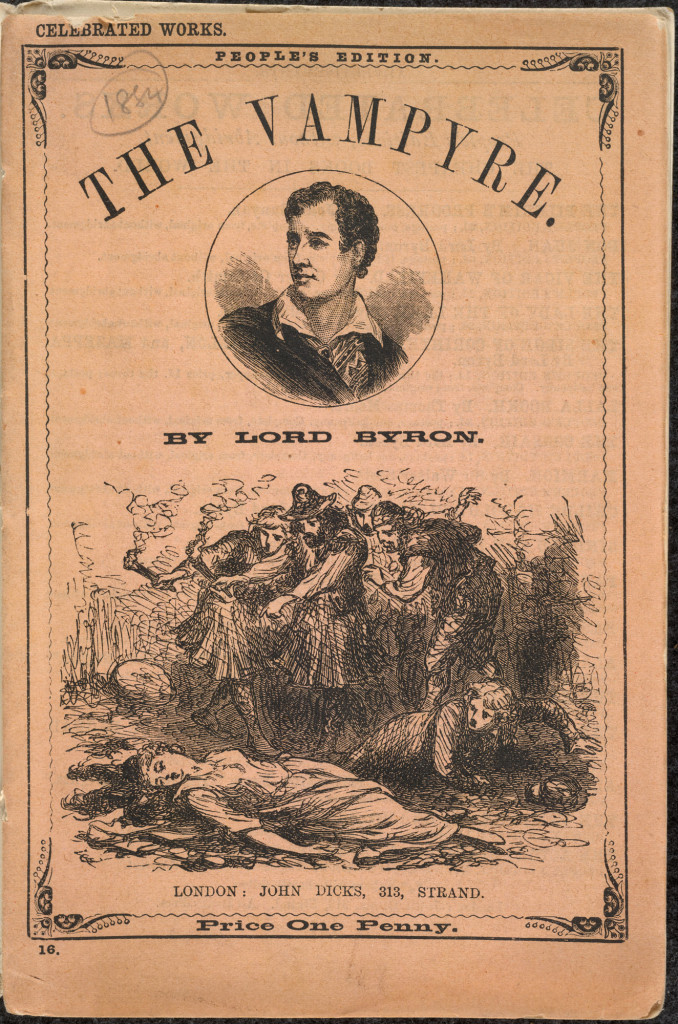 But the thing is, in 1813 Byron HAD written about a vampire… in a poem

Byron became acquainted with the concept of vampires while on his Grand Tour, and in a collection of poems written supposedly based on exotic tales he gathered during his travels, he published The Giaour. 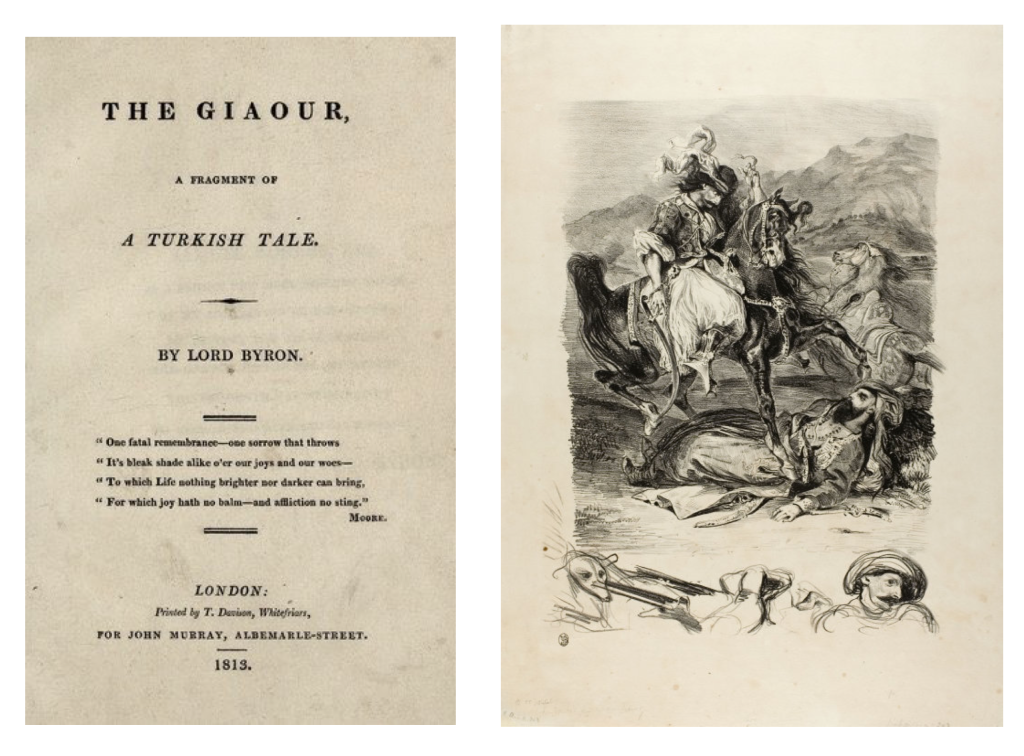 In this poem, Byron relates a romantic supposedly Turkish tale of love and revenge, and a vampiric curse.

The story centers on a giaour — slang for western infidel — who has a liaison with a wife of a sultan. Upon discovery of her infidelity, the sultan exacts his punishment by tying his unfaithful wife into a sack, and drowning her in the sea. Enraged at the loss of his love, the giaour tracks and kills the sultan, and sends his severed head to the sultan’s mother.

The poem is quite long (in different versions between 700 and 1300 lines), but buried right in the middle is Byron’s curse of the vampire, issued upon the giaour by the sultan’s mother, generally accepted as the first reference to vampire lore in English literature. Here is the excerpt:

The Giaour, by George Gordon Byron 1813

But thou, false Infidel! shalt writhe
Beneath avenging Monkir’s scythe;
And from its torment ‘scape alone
To wander round lost Eblis’ throne;

And fire unquenched, unquenchable,
Around, within, thy heart shall dwell;
Nor ear can hear nor tongue can tell
The tortures of that inward hell!

But first, on earth as vampire sent,
Thy corse shall from its tomb be rent:
Then ghastly haunt thy native place,
And suck the blood of all thy race;

There from thy daughter, sister, wife,
At midnight drain the stream of life;
Yet loathe the banquet which perforce
Must feed thy livid living corse:

Thy victims ere they yet expire
Shall know the demon for their sire,
As cursing thee, thou cursing them,
Thy flowers are withered on the stem. 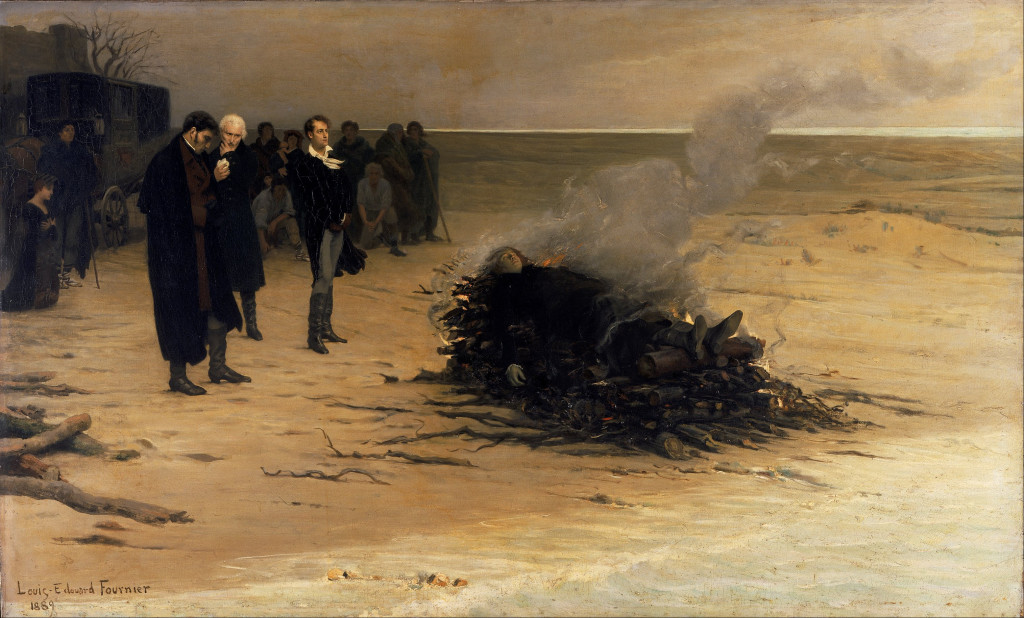 Although all parties involved in the Lake Geneva getaway in 1816 lived often shortened lives full of poetic tragedy and death, through their words and these images and stories, they each did achieve a kind of immortality.

Percy Shelley became almost as famous for his tragic and young death only six years later as he was for his written works. In a series of events as melancholy as the romantic poets could dream up, Shelley was killed in the sinking of his small boat in a storm, off the coast of Italy. After his body washed ashore, it was burnt on the beach in accordance with Italian quarantine regulations. According to tradition, the only part of his body that would not burn was his heart…. so Mary did what any grieving wife might do: she took his heart and kept it close to her for the rest of her life. It was discovered shortly after her death in 1850, stashed inside her desk.

“Blast from the Past” The 1913 eruption of Mount Tambora – SmithsonianMag.com

“The Poet, the Physician, and the Birth of the Modern Vampire” – PublicDomainReview.com

The Poet and the Vampyre, the Curse of Byron and the Birth of Literature’s Greatest Monsters, by Andrew Stott – Goodreads.com

The Vampyre by John Polidari – Archive.org