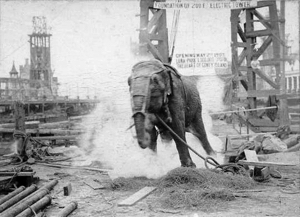 On January 4, 1903 Topsy the elephant was executed through a combination of strangulation, poison, and a liberal application of the new technology of electric current. A terrifying film made the event infamous, leading to confusion over whether this was part of the epic battle between Thomas Edison and Nicola Tesla known as the “War of the Currents” .

Topsy had a troubled career as a circus elephant. Born in Southeast Asia, and imported to the United States as a spectacle, Topsy performed in the Forepaugh Circus, competitors with PT Barnum’s Barnum & Baileys Circus. Circuses and animal spectacles were grueling work for the stars of the show, and work conditions were grim. Stories abound of abuses that seem extraordinary today, but were somehow acceptable a century ago.

Topsy’s downfall came as a result of that abuse, finally snapping when a spectator known for his drunken shenanigans burnt the tip of her trunk with a lit cigarette. Enraged, Topsy threw the man to ground and then crushed his body with her mighty weight. Now a liability to the circus, she was sold to the Luna Park amusement park at Coney Island, where she was put to work dragging logs and pulling rides. Eventually, after firing her (drunken) trainer for hijinks like accidentally stabbing Topsy with a pitchfork and using the elephant to attempt to invade the local police station, Luna Park also decided they no longer had a place for Topsy. But by then, no one else wanted her.

Stuck with an elephant they no longer wanted, and always in search of the next spectacle, the owners of Luna Park announced the impending execution of the “man-killing” elephant. After a couple false starts, the date was set for January 4, 1903. Death would come in three forms: cyanide laced carrots, 6,000 volts of electricity re-routed from a nearby power station, and strangulation, just to make sure.

On the day of her death, hundreds of spectators and press came out to witness the event. Topsy refused to walk, forcing the owners to re-rig the set up where she stood. At 2:45 pm the signal was given to begin the electrocution, and within minutes she was dead.

The short film “Electrocuting an Elephant“ released by Edison Manufacturing Company for viewing in a kinetiscope shows 74 seconds of Topsy’s electrocution. This snippet of time and the association with Edison’s name on the film and in relation to the electrical company that provided the power contributed to later conflations of events, suggesting that Edison had Topsy killed in order to prove to the public that Tesla’s alternating current was deadly dangerous. In fact, Edison did electrocute animals, but that was more than a decade earlier during the height of the so-called “War of the Currents” and he had since become removed from both the power companies and the films created under his name. Although the myth has been repeated numerous times, there seems to be no proof that Edison had anything directly to do with Topsy’s death.

In 2003, in memory of the centennial of her death, a small memorial was erected at Coney Island Museum in Topsy’s honor.