On this day in 1848 Phineas Gage was impaled with an iron rod through his skull, and lived. 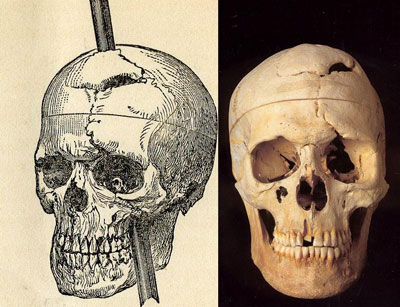 An illustration of the skull of Phineas Gage, with the tamping iron in it, and a photograph of his skull (taken long after his death).

Phineas Gage, (1823 – 1860) was a 25-year old railroad worker in Vermont, when he stepped into history, and the study of medicine. Gage was compacting a bore with explosive powder, tamping it with a tamping iron, when something went horribly wrong. A spark from the iron caused an explosion, which caused the tamping iron ,43 inches long, 1.25 inches in diameter at one end and .25 inches diameter at the other, and weighing 13.25 pounds, to pierce his skull, entering below the left cheek and exiting the top of his head.
Incredibly, Gage survived this, and was conscious a few minutes later as the local doctor, John Martyn Harlow, treated his wounds. Gage recovered physically, though a good part of his left frontal lobe was damaged, and his left eye was beyond repair. He lived another 12 years, holding down various jobs. But, while his body regained vitality, his personality completely changed. His co-workers on the railroad would not have him back, and his friends and family reported him “no longer Gage.” While he was known to be reliable and fairly mild before the accident, now he was “fitful and irreverent”, profane and lacked consideration of others. 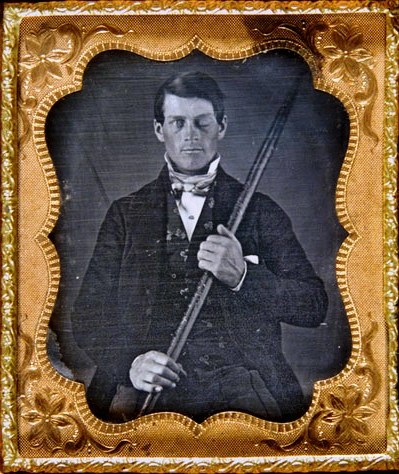 Phineas Gage, after his recovery, holding the tamping iron that injured him.

Gage’s experience was seen as proof that the brain is responsible for much of our personality, and that brain damage is more than physical. His case has been studied in various medical fields, including neurology, psychology, and physiology. After his death in 1860 his skull was sent to Dr. Harlow. Harlow later donated it to Harvard. The skull and the rod can be seen today at the Warren Anatomical Museum in Boston.