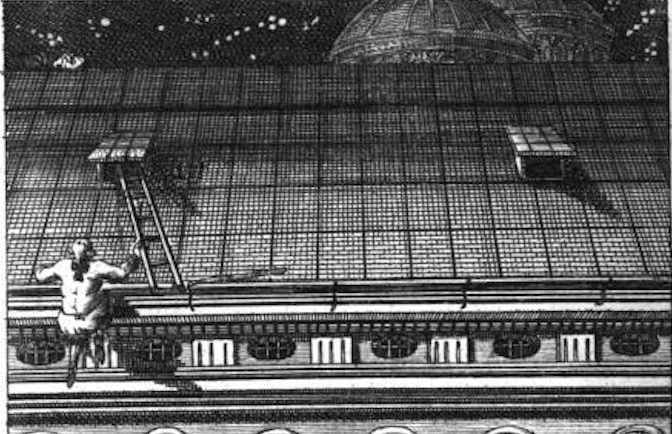 On this day in 1756 Giacomo Casanova executed a daring midnight, cross-rooftop escape from “The Leads”, Venice’s prison, where he had been jailed in solitary confinement for “public outrages against the holy religion”.

Although Casanova is best remembered for his seductions, he also had a degree in law and dabbled in medicine; he was a con man and a gambler, a cleric and a dandy, a prankster, a playwright, and t0 significant to our story – a prisoner. He led a very full life.

In 1756, at the age of 30, Casanova’s exploits began to catch up with him. In his home town of Venice, Italy, he was jailed and sentenced to 5 years, to be kept in solitary confinement in “The Leads,” the prison portion of the Doge’s palace. Miserable and alone, he began plans for a daring escape through the floorboards, sharpening a stolen length of metal he painstakingly scratched his way to freedom.

But then, just as he was about to execute the escape, he was moved to to another cell, where after a bout of self pity, he began anew with the help of a conspirator and fellow prisoner, Father Balbi.

On the night of Oct 31, Casanova broke through and saw the night sky above.

They escaped into the darkness, leaving behind only a note. Like something out of an adventure novel, they stole across the rooftops, prying open windows and descending bed sheet ropes on their way to freedom. Casanova recalled in his very dramatic memoirs:

“I got out the first, and Father Balbi followed me. Soradaci who had come as far as the opening, had orders to put the plate of lead back in its place, and then to go and pray to St. Francis for us. Keeping on my hands and knees, and grasping my pike firmly I pushed it obliquely between the joining of the plates of lead, and then holding the side of the plate which I had lifted I succeeded in drawing myself up to the summit of the roof. The monk had taken hold of my waistband to follow me, and thus I was like a beast of burden who has to carry and draw along at the same time; and this on a steep and slippery roof.”

Casanova fled to Paris, where, despite initial plans to “play the chameleon” and change his ways, he was quickly back to his old ways, devoting time to conning wealthy men out of their money and  women out of their dresses. He would later become a soldier and a spy, a state lottery enthusiast, and a suspected alchemist. His long life was many things, but never boring.

After the seductions and the confidence games, the gambling and the dueling, Casanova sat down at his job as a librarian and wrote his memoirs. He died at the age of 74, still writing. Never short on adventures to relate, the original set completed during his life ran 12 volumes in the first edition – as he said of his life and adventures, “I can say vixi (‘I have lived’).

“Who Was Casanova?” – Smithsonian Magazine