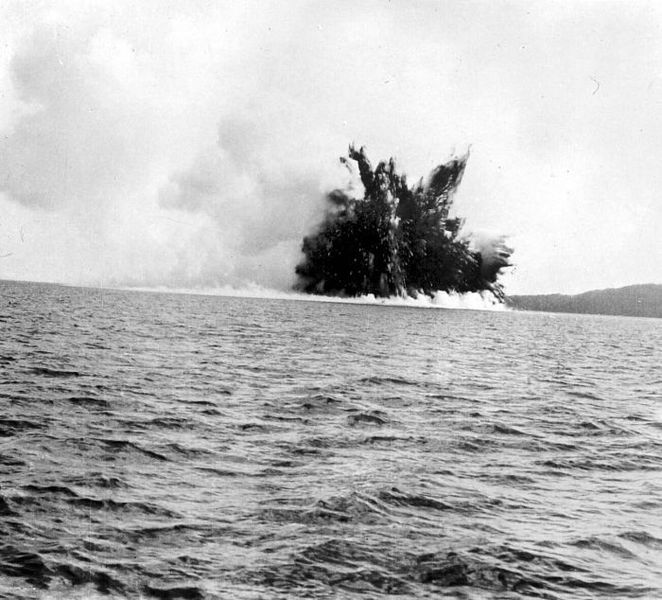 On January 28, 1928: Forty-five years after the catastrophic eruption of Krakatoa that destroyed nearly two-thirds of the volcanic island and killed over 36,000 people, a new volcano rose from the sea to take its place. Locals called it Anak Krakatau – “Child of Krakatoa.”

In August of 1883, one of the largest volcanic eruptions in Earth’s history rocked the Dutch East Indies (now Indonesia).  The explosion of Mount Krakatoa, better known as Krakatau to the locals, was the loudest sound in recorded history and was heard over 3,000 miles away.  The catastrophic eruption and subsequent tsunamis killed over 36,000 people and completely destroyed nearly two-thirds of the volcanic island.

Following the 1883 eruption, many locals returned to the remaining islands that sit along the Pacific Ring of Fire – a crescent-shaped area bordering the Pacific Ocean with many of the world’s largest volcanoes.  The area seemed to be quiet for nearly 45 years when a series of earthquakes signaled that the volcanic crater was still active.

In 1927, the locals reported steam and smoke emerging from the ocean where Krakatau had once stood.  Some even reported explosions that sent a mix of ash and seawater rocketing into the sky.  By early 1928, a new volcanic island pushed through the waves.  Those who live in the area call this new island Anak Krakatau – “Child of Krakatoa.”

Anak Krakatau is one of the fastest growing volcanoes on Earth.  Since it first emerged from the ocean, it has erupted semi-regularly and now rises over 300 meters above sea level.  Scientists continue to watch and study the volcano, searching for clues to why the Krakatau region produces such large, explosive eruptions and what the future holds for the Child of Krakatoa.

Krakatoa: the day the world exploded,  by Simon Winchester – Goodreads.com