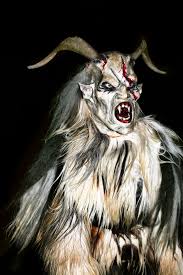 Each year on December 5th, in various towns on different continents, people gather to celebrate Krampus in the evening festival of Krampusnacht. (Disclaimer: while the official date for Krampusnacht is December 5, some locales hold the festival at different dates, though all are in late November-early December)

The celebrations range from smallish parties to city wide parades, and the star of the event is Krampus, a creature that is half goat, half humanoid, with horns, who grabs kids, hits them with reeds (or sticks), and stuffs them in a bag to eat later. The word “Krampus” comes from a German word that means “claw”, and Krampus’ origins are somewhat disputed. Some see him as a pagan god that got demonized and incorporated into Christian folklore. Other sources claim he’s been a demon since the beginning. He’s often seen as the companion to St. Nicholas, or Santa Clause, and takes away the children Santa’s declared to be “naughty”. 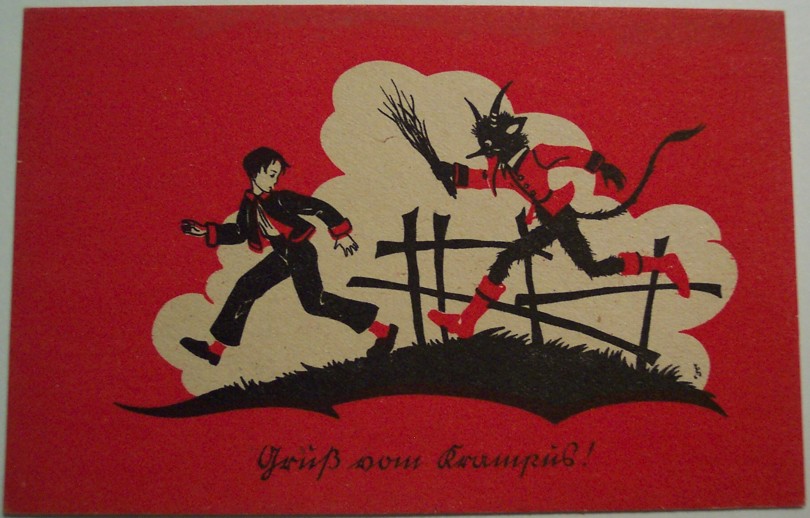 Krampus illustration from the early 1900s

The Krampusnacht celebrations also vary from place to place and culture to culture. People dress up as Krampus and go searching for “naughty” children to scoop up; Kids distribute sweets to parade viewers and participants. There’s singing and dancing, and bonfires aplenty. 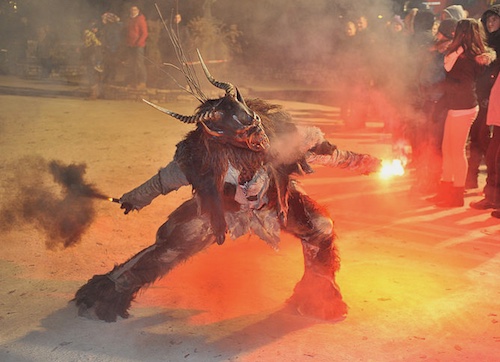 A fire-wielding Krampus at a parade

The most elaborate Krampusnacht celebrations are in Austria (which is also home to the Krampus Museum, in the town of Suestchach_. Here the celebration of Krampus is a multi-week affair, which includes Krampuslauf, a parade of as many as 1,000 Krampuses (Krampi?), in full costume. The parade includes fire, and music, and, according to some, alcohol or mind altering drugs. In addition to this controlled chaos, there is often also a costume party, sometimes for the Krampuses and sometimes for women who are dressed up as Perchta, who is a Germanic pagan deity.