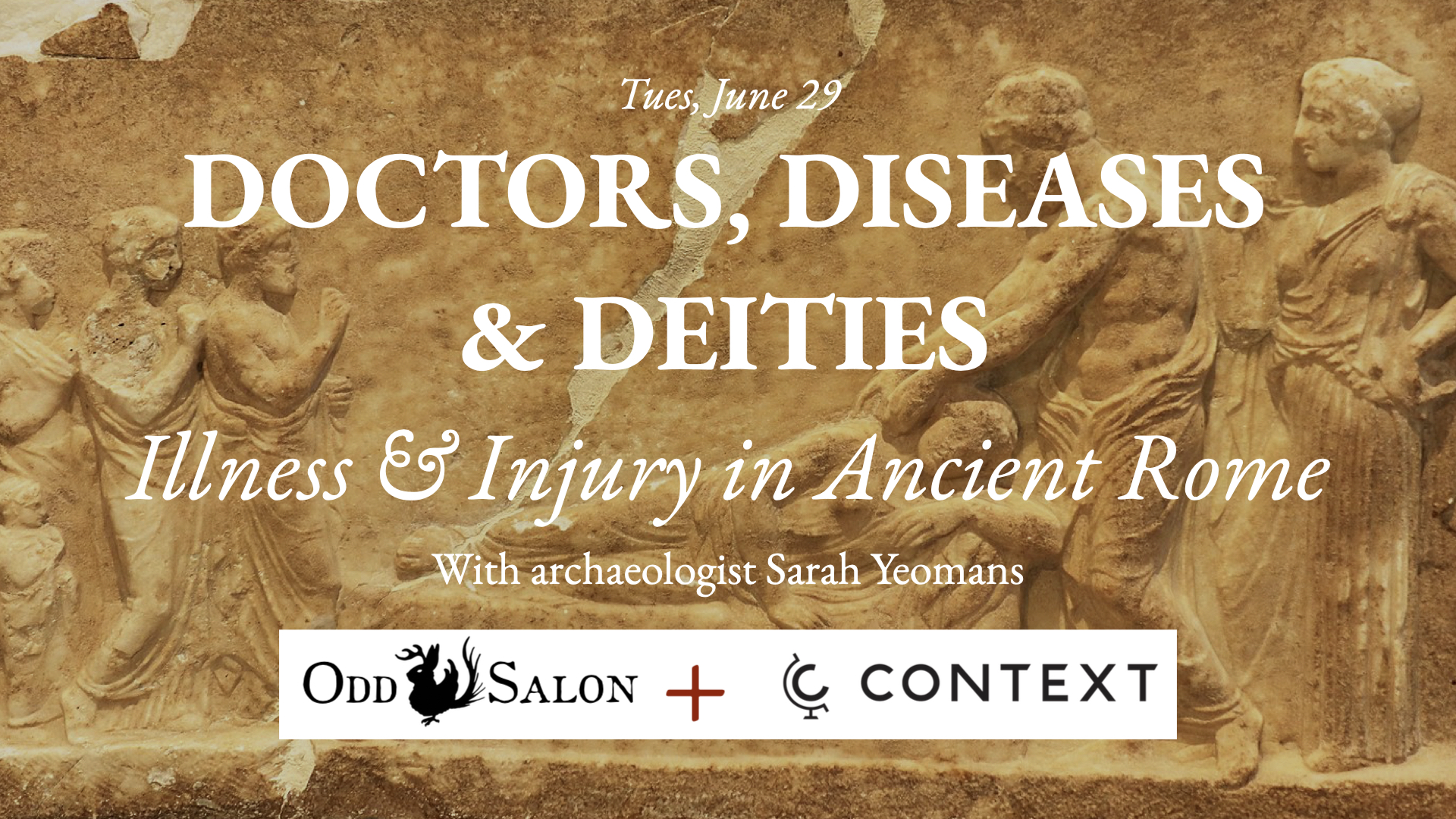 Join us for an exploration of the art, science, and archaeology of medicine in Ancient Rome. This conversation examines a remarkable discovery in Rimini, Italy that has given us an extraordinary amount of information concerning medicine and medical technology in ancient Rome. The “Domus del Chirurgo,” (“House of the Surgeon”) is a treasure trove of artifacts that tell us a great deal about the practice of medicine almost 2000 years ago. We will then go on to discuss the Antonine Plague of the 2nd century, one of the most severe pandemic events the Roman world ever confronted.

Through a combination of primary sources, archaeological discoveries, and modern science, Sarah will examine the pathology of the plague as well as its impact on the economic, political, and religious life of the Roman Empire. What exactly was the “Antonine Plague?” Was it a factor in the destabilization of the Empire in the 3rd century? And most importantly, what lessons can we learn about how to react to population-impacting medical crises today?

Sarah Yeomans is an archaeologist specializing in the Imperial period of the Roman Empire with a particular emphasis on ancient science and religion. Currently pursuing her doctorate at the University of Southern California, she is adjunct faculty at both St. Mary’s College of Maryland and West Virginia University. A native Californian, Sarah holds an M.A. in Archaeology from the University of Sheffield, England, and an M.A. in Art History from the University of Southern California. Her current research involves ancient Roman medicine and the impact of pandemic events on Roman society. She is generally happiest when covered in dirt, roaming archaeological sites somewhere in the Mediterranean region but particularly in Rome, where she lived for six years.

Doctors, Diseases, and Deities: Illness and Injury in Ancient Rome with Sarah Yeomans

This is part one of our four part collaboration with Context Travel, as a special Members & Fellows series. These private events are included for free for all current Odd Salon Members, Fellows. To join us: New members may join by purchasing either the four part series pass for $125, or purchase tickets here to join the membership and reserve a spot for this seminar only for our standard annual membership cost of $100.

ABOUT CONTEXT TRAVEL: Context Learning is a cultural education provider, connecting global scholars with lifelong learners. Founded in Rome in 2003, Context started as a tour operator for travelers seeking off-the-beaten-path experiences in the world’s cultural capitals, growing quickly to 20,000 tours a year across 70+ destinations. After COVID-19 halted travel operations, Context continued to expand, launching live, scholar-led seminars and courses presented online. What emerged was a thriving community of experts and learners keen to continue exploring, growing, and philosophizing, regardless of their location. To date we’ve covered thousands of topics ranging from Tuscany to Timbuktu, Caravaggio to Frida Kahlo, Ancient Rome to Brexit. Context strives to be the cultural center for lifelong learning, at-home, on the ground, and everywhere in between.

If you are not already familiar with the many wonders of Context Travel, we’d heartily encourage you to go forth and explore their virtual and real-world exploration offerings