Images of the dancing dead, of frolicsome skeletons and doomed companions can still be found gracing the walls of churches and burial yards throughout northern Europe. But there used to be many, many more.

The danse macabre dates primarily to the 15th century, debuting about a century after the horrors of the black death first appeared in Europe, and in the wake of famines and starvation, amidst the reign of terror of freelance mercenaries and massive political uncertainty, and the tail end of the blood-soaked campaigns of the the hundred years war.

The depiction of deathly motifs in art was not new – skeletons as a design motif goes as far back at least as antiquity – murals, mosaics and dinnerware featuring cavorting skeletons were found at Pompeii.

In the classical era, these were intended as a reminder that life is short, and, as the poet Horace put it, Nunc est bibendum, nunc pede libero pulsanda tellus (Now is the time to drink, now the time to dance footloose upon the earth).

But by the middle ages, these kinds of art were more inspired, and rightfully so, less by the furious swell of empire and drink, but instead by the realization that everything was terrible, everyone and everything you love may be taken from you in an instant, and they may all be doomed. The stage was, as they say, strewn with bodies.

Although there is debate about exactly what kicked off the trend, the danse emerged at the same time as a few other macabre arts, including transi, or cadaver tombs, books like the Ars Moriendi, preaching the morals and techniques of “the good death”, and against a backdrop of folkloric stories of the walking dead and a growing body of revenant mythology.  One part pious reflection on the universalness of death, one part gallows humor response to seeing more than their fair share of death, the danse macabre that grew up in the 1400s developed a distinctly blackly humorous approach, with elements of satire and a playfulness that makes them a delight to behold.

Whatever may have come before, the mural painted at Cimetière des Saints-Innocents in Paris began a trend that would continue for more than a century. The Parisian panels, depicting a parade of male figures accompanied by a skeletal death was painted between 1424–25, decorating the sheltered walls of the cemetery charnal house, or ossuary. It was destroyed in 1669, but during the time it existed it became something of a sensation, and kicked off the danse throughout Europe.

In the dance, the personification of Death acts as an intermediary, a blameless middleman, escorting souls from their earthly domains into the hands of whatever fate their worldly lives had warranted.

These panels, while overtly pious and a reminder to repent and lead good lives lest one be cut down as so many had been, in the midst of life, they also allowed the artists to express social commentary, in the form of satire and suggestion. The danse included not just nameless living souls, but specific faces and identifiable traits. Popes and kings faced the same certain fate as peasants and sinners. In this death was the great equalizer, and many of the panels toyed with the motifs of poetic justice.

The Paris danse was not seen outside of Paris until 1485 when it was first reproduced in print by Gui Marchand, but before that there were other depictions in print, clearly inspired by the Paris work. 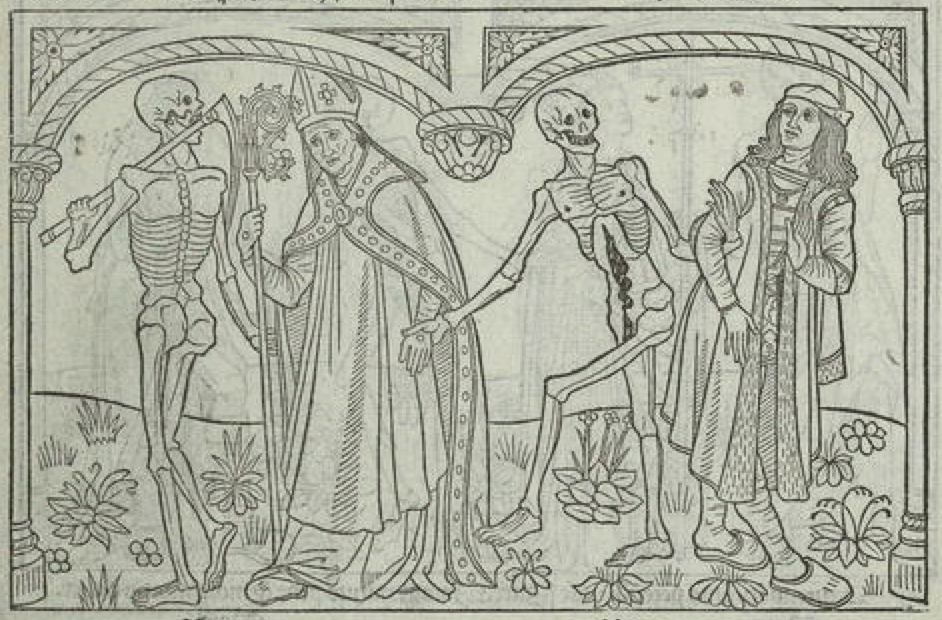 While many of the murals and frescoes of that once decorated walls of churches have been lost, the danse is preserved in abundance in print. The very first known appearance in print was not the main subject, but a series of marginalia in a book of hours, 1430-1435, now housed at the Pierpont Morgan Library, known as MS M.359. 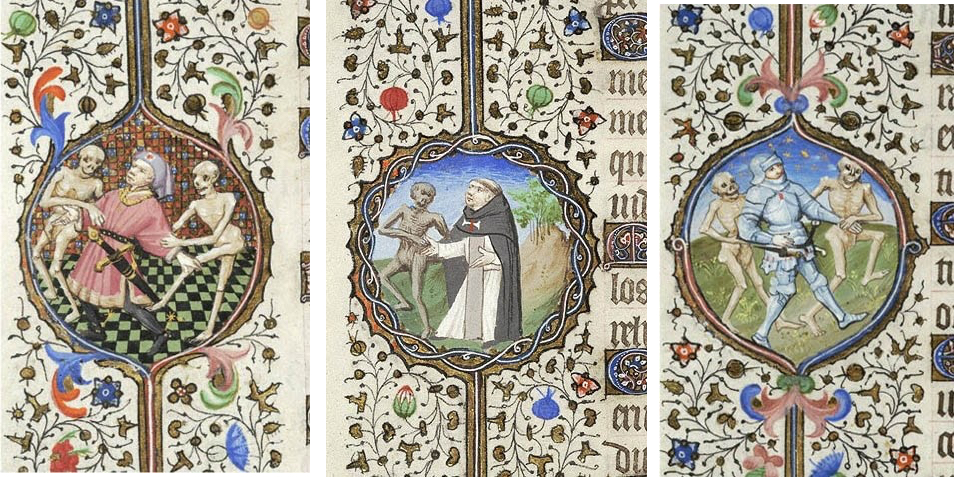 Also in 1430, an Englishman named John Lydgate brought the danse north, in a version which included women for the first time. Painted at the Old St Paul’s Cathedral in London, it was destroyed in 1549, but not before its influence had spread and many copies and derivatives made in churches and cemeteries across England, and into illustrations and printed work. The art trend spread through England and France, and into Denmark, the Netherlands and Belgium, but it was in Germany that it really took hold and flourished.

A truly extraordinary edition was created in 1528 and printed in Basel, Germany in 1538, featuring illustrations by Hans Holbein the Younger, and what ended up being the final work of master wood cutter Hans Lützelburger, who died before it was finished. The first edition of Simolachri, Historie, e Figure de la Morte featured 41 stunningly detailed and humorous woodcuts depicting a frolicsome skeletal death delighting in his work. It would go on to be republished many times, expanded, and widely copied. Holbein’s danse became the touchstone work for generations that came after.

Later in his career, Holbein would become famous as a portrait artist, working for the English royal family under Henry VIII, and probably most famous for his 1533 double portrait “The Ambassodors” which included a distorted anamorphic perspective of a skull beneath the feet of the two men.

In addition to Holbein’s creations, probably the most famous single image to come out of the tradition, and most familiar to modern eyes, is a woodcut by Michael Wolgemut, illustrator, printmaker, and teacher of Albrecht Dürer, published in the Historia mundi, also known as the Nuremberg Chronicle, 1493. 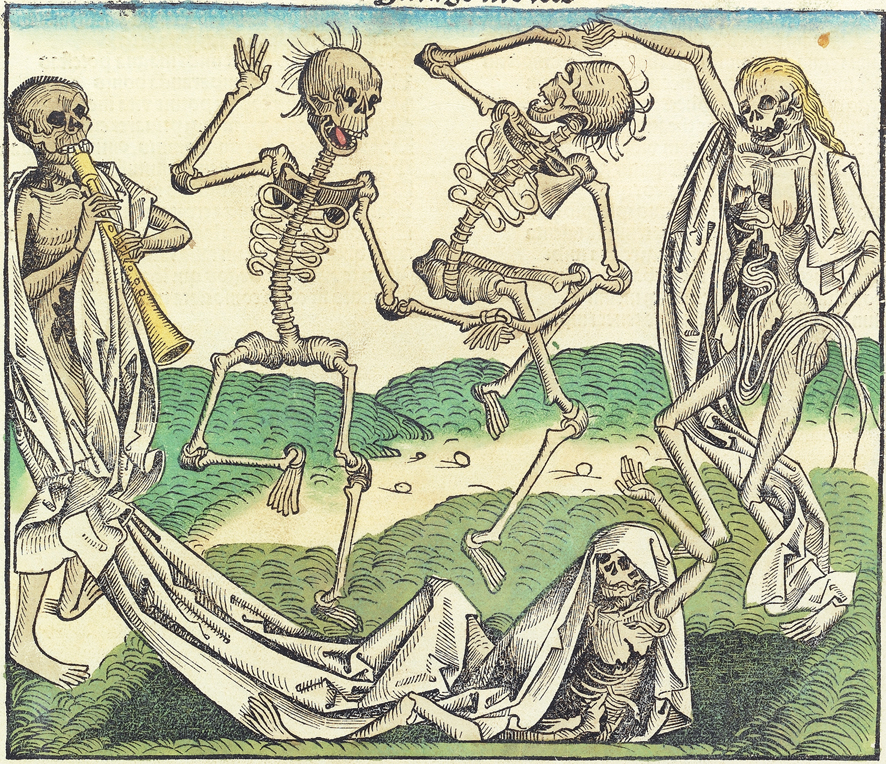 The danse went on. Between 1482 and 1491, the danse was re-cast with all all female line up for the first time, beginning a tradition leading towards the death and the maiden motif, which flourished through the Renaissance and into the Romantic era. Every few decades since the first published works, different writers and artists have taken up the tradition, creating variants appropriate to different times and places.

Four centuries later, French composer Camille Saint-Saens composed his own danse macabre in 1874, this time in musical form. The tone poem was inspired by a version of the danse macabre story in which every Halloween, death comes out to play music to entice the dead to dance until the rooster crows for dawn. Here it is performed in 2012 by Les Clefs de l’orchestre with the Philharmonic Orchestra of Radio France:

An excellent short history overview, with several rare examples:  “Of corpses, constables and kings. The Danse Macabre in late medieval and renaissance culture” –The Journal of the British Archaeological Association, 2004

Wraiths, Revenants, and Ritual in the Middle Ages, by Nancy Mandeville Caciola – Academia.org

“Exquisite Corpses: The Art of the Cadaver Tomb” – Atlas Obscura

Invocations: Morals of the Secret World