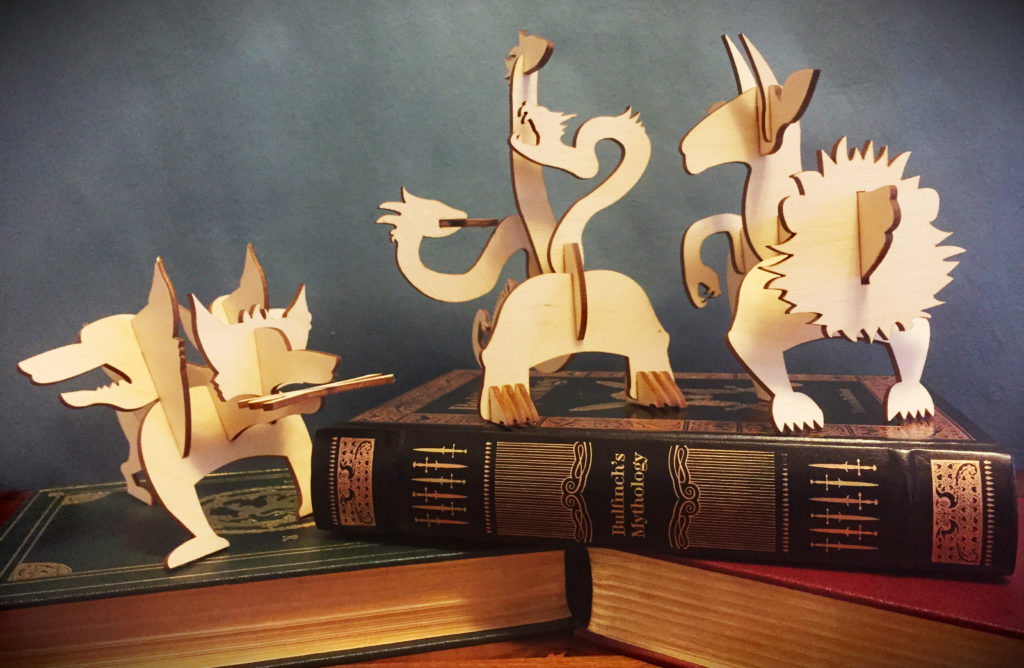 Each Odd Box BEAST included one of three laser cut mythical monsters of Greek lore and legend. Here’s how they go together:

With the head of a lion, a snake for a tail, and a goat’s head atop its back, the fire-breathing Chimera made its first appearance in Homer’s Illiad. An omen of natural disaster and a menace to the local population, the fearsome monster was finally slain by the hero Bellerophon astride the winged horse Pegasus. The name “Chimera” has come to describe any mythical beast comprised of disparate parts.

In Greek myth, the fearsome monster that dwelt at Lake Lerna was armed not only with its many ferocious serpentine heads, but with an invisible poisonous aura – the mere scent of the Hydra’s breath or blood could kill.

With as many as fifty heads, each with the power to regenerate when severed, the Hydra first appeared in Hesiod’s poem Theogony, and famously features in the story of the “Twelve Labors of Heracles”, in which the hero slays the the monster, and then tips his arrows with its poison blood to face future foes.

Cerberus, the ferocious “Hound of Hades”, is first mentioned in Homer’s Illiad and Odyssey, in which the many-headed beast guards the gates of the Greek underworld. In some versions of his story, his body is also covered in snakes, and has eyes that flash with fire. In the myth of the “Twelve Labors of Heracles”, Cerberus is defeated by the hero in his twelfth and final challenge.

All of our laser beasts were created for us by artist Sharon Eisley. You you can find her work online at sharoneisley.com

If you are having trouble fitting the pieces together, a little bit of sandpaper will go a long way. Still having trouble? Missing a foot or a horn? Shoot us an email>

These three Greek Monsters were part of Odd Box One: BEAST – More here>