On this day in 1515 a magnificent beast arrived in Portugal from the far east, a nearly mythical creature unseen in Europe for a thousand years. This one rhinoceros lived a short life, but his image has carried forward for centuries.

A gift for the king’s menagerie, the rhino was shipped from Goa, India to Portugal. After a voyage of 120 days, it arrived in May and was an immediate sensation.

Wasting no time, on June 3 the king arranged for an epic battle between his elephant and the new rhino, based on the idea (which had trickled down from Pliny’s somewhat fanciful writings) that the two animals were mortal enemies. Ultimately the rhino seemed game, and sauntered forward – but the elephant immediately bailed, and battle was averted.

Disappointed in his clearly defective rhino, Manuel decided to ship it off as gift to the Pope in Rome, as a follow up to a white elephant he had previously shipped.

The ship carrying the rhino departed Lisbon in December of the same year, only to go down in a shipwreck en route.

Despite its sad end and shortened life, the spectacle of the rhino was such that numerous letters and drawings were dispatched across Europe almost immediately after his arrival. One of these sketches reached Albrect Durer in Nuremberg, Germany. From this, Durer created one of his most enduring images: his pen and ink sketch of the armored beast, accompanied with a caption describing his ferocious nature: 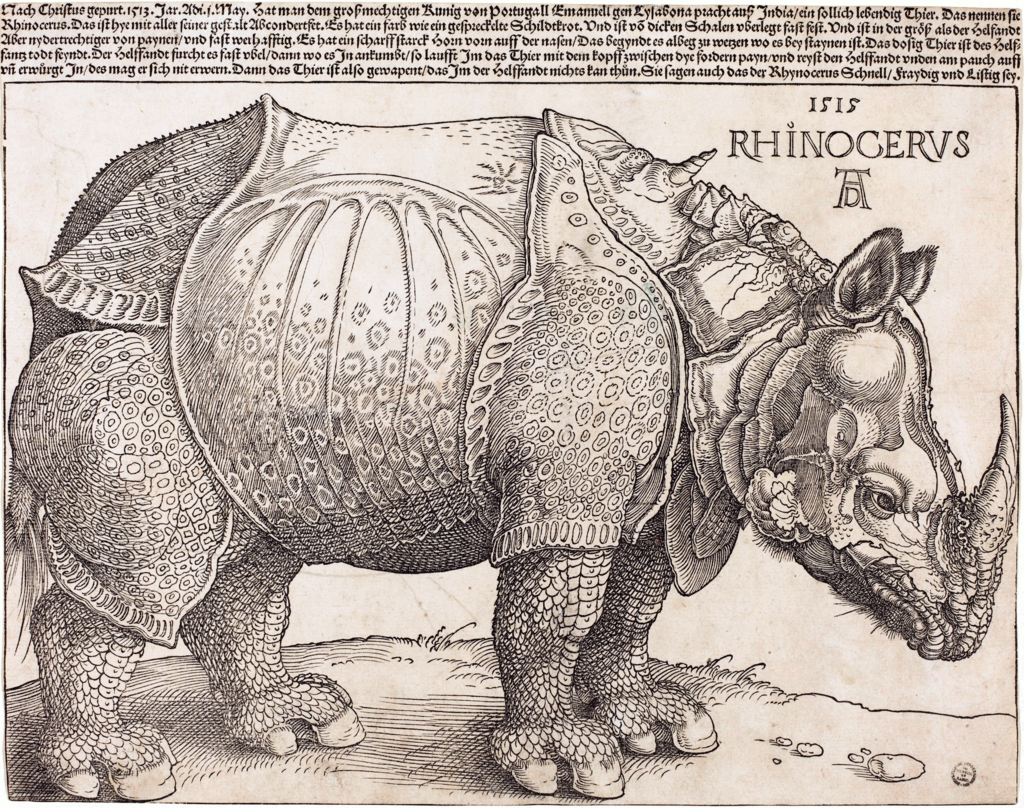 The Rhinoceros, by Albrecht Dürer – National Gallery of Art, via Wikimedia commons

The caption on this illustration reads:

*Note – this date error is on the original artwork

Despite all of the technical inaccuracies of Durer’s illustration, it captivated the imagination and went on to be the default illustration for the rhinoceros until the Enlightenment. Variations and copies abound, from sculptures to cathedral carvings, naturalist illustrations to the rhino shaped gargoyles that decorate the famous Belem Tower of Lisbon, marking the site where it first arrived.

The Idea of a Rhinoceros – Things Magazine

May 25, 1876  – Adam Worth steals a recently discovered Gainsborough portrait, keeps it from the Pinkertons for over 25 years