This post was contributed by Odd Salon Fellow Frederic “Lightning” Leist, our resident polyglot medievalist and corrector of mispronounced French, who has brought us stories of forgotten spices, “mad” scientists, and introduced us the spectacular beauty of the artwork of Maria Sibylla Merian

Have you ever wondered why we refer to our numbers as Arabic numerals? After all, Arabic is written from right to left, while ‘Arabic’ numerals are written from left to right. It was the Persian scholar al-Khwarizmi, working at the House of Wisdom in Baghdad, who introduced these Indian numerals to the Arabs, writing his book “On the Calculation with Hindu Numerals” in about the year 820. They were only widely adopted in Europe much later.

Al-Khwarizmi was a polymath who gave us the field, and name, of algebra, improved upon Ptolemy’s Geography, wrote a treatise on the uses of the astrolabe, and whose very name gave us the word ‘algorithm.’ But why was he in Baghdad, and what was the House of Wisdom?

Baghdad had been founded just two generations before, as the new capital of the Abbasid Caliphate, and was a magnet that attracted people from all over the Islamic world and beyond. The caliphs built up an enormous library, which they opened up to scholars, and encouraged translations, especially from Greek and Persian, but also Syriac, Sanskrit and Coptic. Translators, many of them ‘heretic’ Christians unwelcome in the Eastern Roman Empire because of their unorthodox views, were well paid. Early Abbasid viziers came from the Barmakid family, who had been hereditary abbots of a Buddhist monastery in what is now Afghanistan, before converting to Islam and moving to Baghdad. Like the caliphs themselves, the Barmakids sponsored scholars and translators. Paper, so much easier and cheaper to produce than parchment, had recently been introduced from China, allowing manuscripts to be produced in much greater volume than in Europe.

Shortly before the time of al-Khwarizmi, the Caliph Haroun ar-Rashid, who appears so often in the Arabian Nights, founded the House of Wisdom, originally as an annex to the caliphal library. It grew into a research institute, especially in the fields of medicine, astronomy, mathematics, and, for a while, philosophy. A contemporary of al-Khwarizmi’s at the House of Wisdom was al-Kindi, who reconciled Aristotle with Islamic theology, and wrote on medicine, chemistry (including the distillation of wine), optics, and even a book on decrypting ciphers by frequency analysis.

Slightly later, three Persian brothers known collectively as the Banu Musa produced their Book of ingenious Devices at the House of Wisdom. Some of the machines they described were based on ancient Hellenistic, Persian, Indian or even Chinese sources; others were their original designs. Some were whimsical, such as the flute-playing automaton controlled by what looks remarkably like a punch card; others were practical, such as the mask and bellows that would let someone work in foul air.

The House of Wisdom continued even as Baghdad came under the rule of Persian and Turkish dynasties who reduced the Abbasid caliphs to figureheads. Later rulers took a dim view of Greek philosophy, however. To paraphrase, “If it agrees with the Qur’an, it’s redundant; if it disagrees, it’s misguided. Either way, we don’t need it.” Meanwhile, another school of translation arose in Toledo, this time from Arabic to Latin, after its Spanish reconquest in 1085. Among the Greek works reintroduced to Western Europe from the Arabic were Ptolemy’s Almagest, Euclid’s Elements of Geometry, and many books by Aristotle. Books by al-Khwarizmi, al-Kindi, and the Banu Musa were also translated, a legacy of the House of Wisdom to the Latin West. 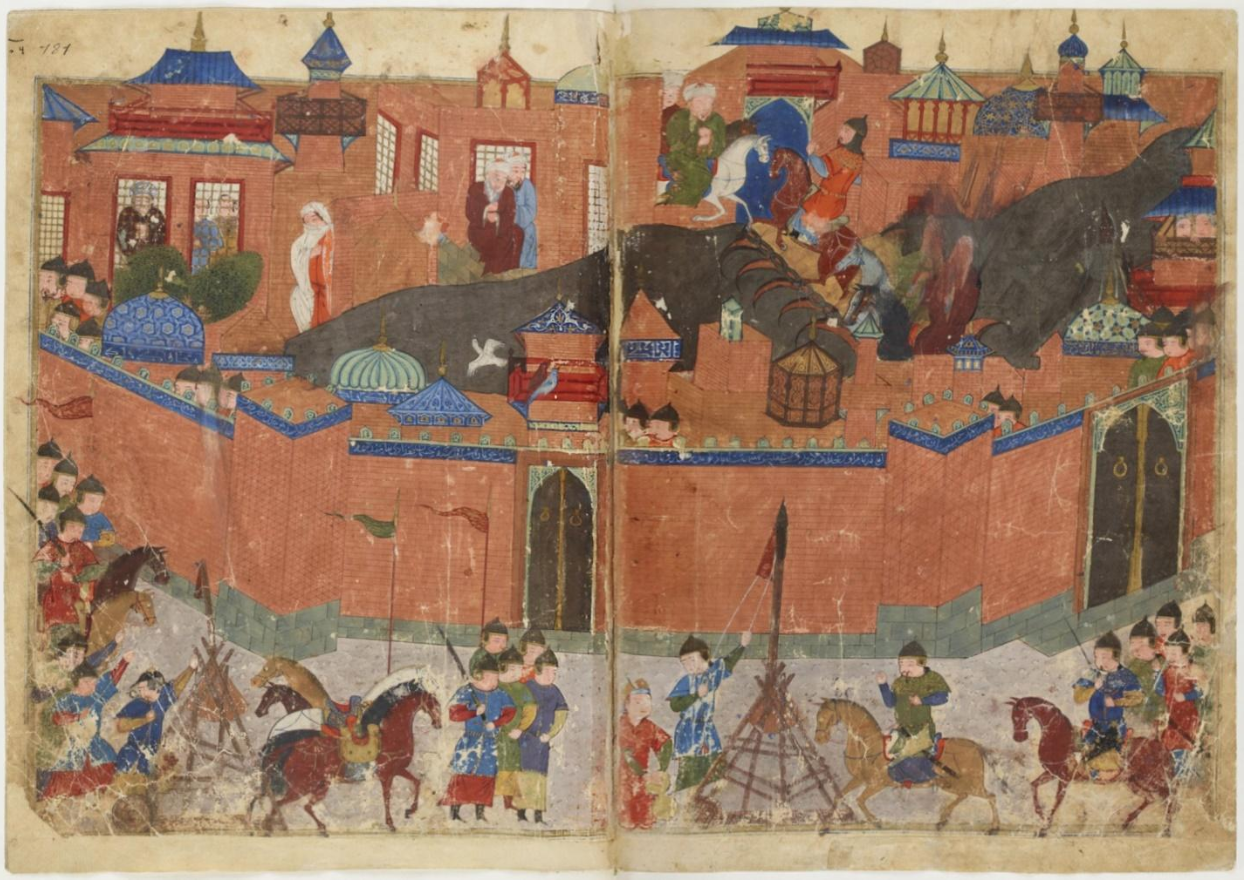 The coup de grâce for the House of Wisdom came with the Mongol sack of Baghdad in 1258. It may be true that so many manuscripts were thrown into the Tigris that, as was reported, the river ran black with ink, then red with the blood of scholars. It is certainly true that most of the population, including the last Abbasid caliph, were killed, and that the House of Wisdom was so thoroughly destroyed that no trace of it remains.

You can kill a person, or destroy an institution, but ideas are harder to kill. The House of Wisdom was inspired by the Library of Alexandria and the old academies, like Jondishapur, of pre-Islamic Iran.  Its spirit lives on, wherever old wisdom is gathered, preserved, shared, and extended.